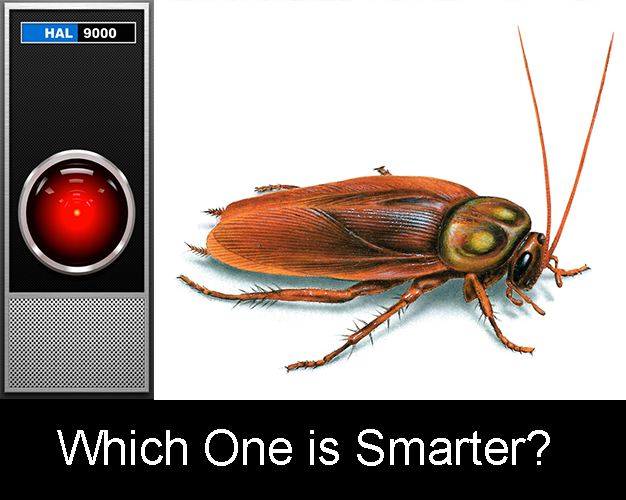 Avinash has kindly responded to the comment I left on his blog that inspired my AI Cockroaches post.

Here was his response, and mine is below it:

Enough has been already delivered, and you are using it already, to know that practical revolutionary use is already happening. If you’ve used Google Translate at all, your demo theory is imprecise because Translate is used by millions every day and is completely running off a Deep Neural Network. (Oh, and it just learned how to translate how to translate from Russian directly to Japanese without any human involvement!) Deeper technical article here.

I offer two more thoughts for your consideration.

Chess is brute for computation. Go has more moves than, Bob, stay with me here, the sum of atoms in the entire known universe. AlphaGo beat the very best human players not by brute force computation but by mastering intuition. (Technically a combination of a Policy Network and a Value Network. Deep technical details here.)

Please don’t limit your imagination related to hardware and compute power to traditional strategies. Google invented Tensor Processing Unit to do something revolutionary: Train AND execute neural networks. The hardware, specialized for ML, delivered 15–30X higher performance and 30–80X higher performance-per-watt than contemporary CPUs and GPUs. An unimaginable leap. Deep technical details here. And this was the company’s first attempt at this.

You are right about Quantum Computing. I did not discuss it because it is very early times for now. Yet, mind-blowing stuff to come. (There is speculation that a quantum computer that can perform a fiendishly difficult task that no classical computer is less than 12 months away. With 50 qubits!)

Let’s put something sweet where your words are coming from. If in five years you don’t agree that atleast 80% of what you say in your comment is demonstrably imprecise, I’ll buy you a cup of coffee. If for some reason we can’t meet in person, I’ll send you a gift card for two coffees (mine and yours). Game? 🙂

Avinash, thank you for your thoughtful response!

I am a skeptic, but I’m not just a skeptic, I’m also a practitioner of AI.

I sold a company that used AI technology to create a product one of the world’s foremost experts on Genetic Algorithms said wouldn’t work for $45 million.  I run a company today as a solopreneur that makes software for CNC Manufacturing that also uses Machine Learning to optimize results.  It gets over 4 million visits a year due to my content marketing efforts, so I guess that makes me a marketer too.  And yes, I use a considerable amount of analytics to make it go.

In that sense, I know that practical revolutionary use is happening.  I’m the recipient in two cases so far of the results!

But I think you misunderstand what I mean about these things being “Demos” and not Artificial Intelligence.

If the term “Artificial Intelligence” is to have any meaning, it must get beyond niche applications that don’t produce human-like results and clearly don’t work anything like the human mind.  After all, it is achieving the results of the human mind and exceeding them in every sense that leads to the breathless “Camels to Cars Moment” kind of rhetoric.

Computers have been able to do better than humans at one thing or another since their inception.  AI needs to reach loftier goals than that.

Let’s take your translation example.  It is indeed remarkable and it is useful.  But it doesn’t understand language in any meaningful sense the way a human translator would.  I can enter the first two paragraphs of your response to me and ask it to translate to Russian:

That’s awesome!  Now I don’t speak Russian, so I don’t know whether it’s correct or not.  But, lovely software that it is, I can ask it to translate that Russian back to English.  It gives me this:

Now aside that pretty conclusively proves my point right there.  I would love to use Google Translate to help me deliver my software in many markets without having to hire a translation service.  But I can’t afford to have it make a mistake that profound in my application.

You say your Go program has “mastered intuition”.  Come on Avinash, you talk about imprecision but nothing could be more imprecise.  We don’t even know much about what intuition is among real people let alone machine intelligences.

A computer beat the human master and then retired.  Most everyone agrees it didn’t play as humans play.  There is also a contingent that believes confronting such a different style was a big factor in the humans losing.  What if these masters had grown up playing such machines as well as human opponents and were used to their styles?  I think that’s a big part of why the AI’s retire as soon as they can declare victory.

As far as limiting my imagination about what hardware can do, it isn’t imagination, it’s science.  Computer Science, to be precise.  As a computer scientist I understand what Tensor Flow is, and it isn’t really magic that transcends the capability of traditional Von Neuman and Turing architectures.  it’s just applying hardware that is a little more focused on the specific problem to gain a small advantage.  It doesn’t suddenly leap over Moore’s Law or traditional computing in any meaningful way.

BTW, the organic world does the same.  We have specialized processing in our retinas, for example, to assist in vision pattern recognition.

The same could not be said about Quantum Computing which is a whole new ballgame.  But here is where we really do need to be precise.

The estimates of when we can hope for computers to be as powerful as the human brain are based on roughly comparing the quantity and performance of human neurons to computer CPU’s.

You stated it directly:

Neural networks we are using for Deep Learning at the moment have around a billion neural connections compared with around 100,000 billion in the human cortex.

About quantum computing, you go on to say:

(There is speculation that a quantum computer that can perform a fiendishly difficult task that no classical computer is less than 12 months away. With 50 qubits!)

Now here is the point I was making:

That means we have about 40 years of work to do to get Quantum Computers with 1 billion connections and then another 30-odd to get to the human brain’s capacity.

Avinash, I like those odds.  I will take your bet that 80% of what I’ve said will be shown to be wrong in 5 years.  I love coffee and look forward to enjoying a cup soon!

PS  Happy to buy you a cup any time.  Love a good chat!

2 Replies to “Avinash Kaushik Responds to My AI Cockroaches Post”